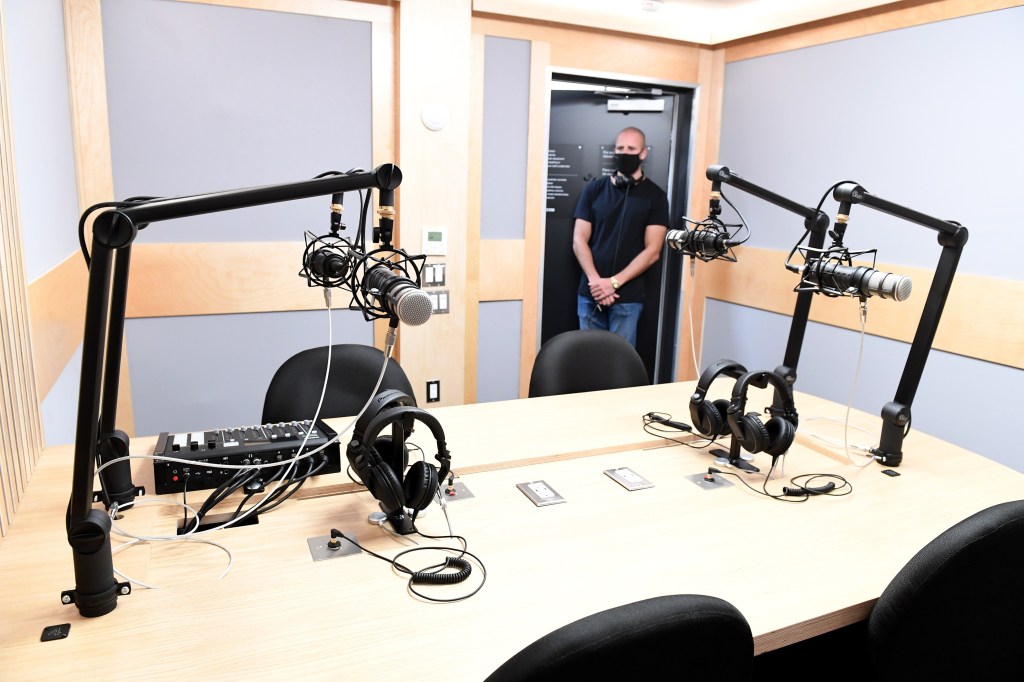 The West Adams and Silverlake sites opened late last year. The facilities are available 24 hours a day with a wide range of professionally equipped spaces.

Studios can be used by musicians, singers, producers, DJs, and voice-over actors to rehearse, record, or even broadcast live via high-speed internet service.

Pirate is offering free three-hour sessions to customers through March 23.

So what exactly is a self-service recording studio?

The concept is decidedly different from traditional studios, which are much more expensive and usually come with a massive mixer, dozens of rack-mounted effects and an on-site engineer.

Sammi Alani, co-founder of Pirate and vice president of North American operations for the company, explains the difference:

“Customers who use our recording studios already have all the recording software on their computers when they arrive,” he said. “For most sessions, clients only need to bring a laptop and USB cable along with their guitars and other instruments to start working. The studios have just about everything you would need.

The West Adams site, for example, has 13 recording rooms equipped with amplifiers, keyboards, drums, monitors, microphones and headphones, as well as two podcast studios, eight DJ rooms and three rehearsal rooms, as well as parking at the rear. The studio is at 4713 W. Jefferson Blvd. The Silverlake studio is at 2807 W. Sunset Blvd.

Rates start at $10 per hour for off-peak hours (midnight to noon), but can reach $30 per hour at other times.

Bianca Bracho, a producer and DJ who goes by the name Bianca Oblivion, is already a regular at the West Adams site.

“I use the DJ rooms there to practice and record sets,” said the 36-year-old Culver City resident. “I also did a live production tutorial on a song I’m working on.”

She said the studios are easy to use.

“It’s pretty intuitive,” she said. “They send you the codes to get in and all the rooms and hallways are very self contained. You enter the building and, depending on which hallway you’re using – whether it’s for production, a band or a DJ – you enter the code to enter your room and plug in your laptop.

Pirate, which employs around 150 people, has no staff in its studios. But help is not far away if problems arise.

“We have 24-hour CCTV coverage and a customer service center that can be contacted if customers have a problem with the equipment,” Alani said. “We also have spare parts in cupboards that they can access.”

Common areas are cordoned off to maintain social distancing and masks must be worn by all customers. Hand sanitizing stations and sanitizing products are available in all facilities which are deep cleaned daily.

“We saw an opportunity to make studios more affordable for people just by being open all the time,” he said. “It had the added benefit of allowing artists to use the studios at times that suited them.”

Pirate was launched in 2014 when co-founders David Borrie and Mikey Hammerton decided to design their own studio in Bristol, England after being disappointed with the quality of rehearsal space available.

Once it was up and running, they let their friends use the room to practice for upcoming gigs. The company eventually grew into a network of over 400 facilities worldwide.

Pirate was able to open three locations in New York during the pandemic, and the company plans to open more studios in Southern California as well as cities including Chicago, Dallas, Houston, Austin, Atlanta, Nashville and Toronto.

Beau Croxton, whose indie garage band Damn Jackals uses a Pirate studio in New York for rehearsals, is sold on the concept.

“They have everything we need – Fender amps and Marshall batteries and a full drum kit,” he said. “The facilities are wonderful. We used to go to other rehearsal rooms in Brooklyn, but they were run down and smelly. We booked the Pirate Nonstop.”

2021-02-26
Previous Post: Pirate, the UK’s largest network of recording studios, launches in the US
Next Post: New report warns independent music artists are being squeezed out of streaming revenue