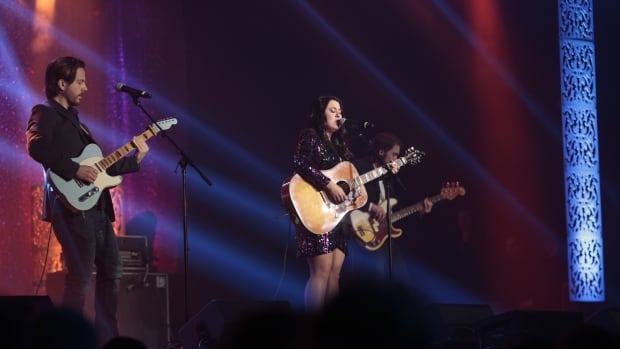 Lounge gigs are a thing of the past for this year’s East Coast Music Awards.

The five-day event with concerts, workshops and the long-awaited gala recognizing East Coast talent kicks off in Fredericton on Wednesday and wraps up Sunday.

The event returns to Fredericton 14 years after it was first hosted by the capital.

And the 34th annual event will be special.

“The most important thing is that we are here live,” said Andy McLean, CEO of the East Coast Music Association.

The event will take place across the city in 11 venues, 14 stages and will feature 150 bands, resulting in approximately 500 performers.

The main event will take place on Thursday evening and will be hosted by Maestro Fresh Wes at the Aitken Center.

The 2020 and 2021 events were cancelled, delayed, then performed virtually due to the spread and restrictions of COVID-19. Once these restrictions are removed, artists and listeners can come together face-to-face.

One of the recognized musicians is Monika Ouellet, also known as Lazermortis. She is a funeral director and embalmer from Saint John who also does 1980s synth-wave electronica and is nominated for ECMA’s electronic recording of the year category.

She has described her music as imagining what happens after death – but for machines.

“It’s kind of my imagination of what an afterlife for artificial intelligence might look like,” she said.

Musically, she was inspired by what her mother listened to: synthetic music from the 1980s like Gary Numan and A-Ha. Her interest in death care also came from her mother, who wanted to be a medical examiner. By mixing the two, Ouellet found a concept that marries the two parts of his life.

Another artist who will be part of the ECMAs is Lisa LeBlanc, whose new album, Chiac Nightclubwas a product of pandemic stupidity.

She said “desperation” is what prompted her to come up with this high-energy disco and funk-inspired new album. It all started with bingo events she was hosting online when she couldn’t perform live.

LeBlanc needed songs to go along with bingo events, so she wrote some quick, easy, and fun tunes. And suddenly, it was an album.

“I had so much fun writing these tracks because the stakes were so low,” she said. “It was fun to write again…and so I was like, well, let’s not force it, it’s really fun, let’s see if we can make a real album.”

LeBlanc will perform in the main event on Thursday.

“You have to be resilient”

McLean said the challenges of the pandemic have forced some people to give up the craft, opting for a more conventional lifestyle. But others have held on, hoping for a day when they can see their audiences again.

“I have to salute the resilience, the tenacity, the dedication and the courage to come out and do this,” he said.

McLean said that over the past two years the event has developed skills in adapting and putting content online, so the team has gotten good at it.

It’s ECMA week – and this year all the festivities are happening in Fredericton. Lisa Leblanc will be performing this week and she has a lot to celebrate with a truly amazing new album Chiac Disco. 11:17

And because connecting with an international community is important, the association will continue to have virtual elements.

“We are following what public health recommends,” he said, noting that organizers won’t object if someone wants to wear a mask.