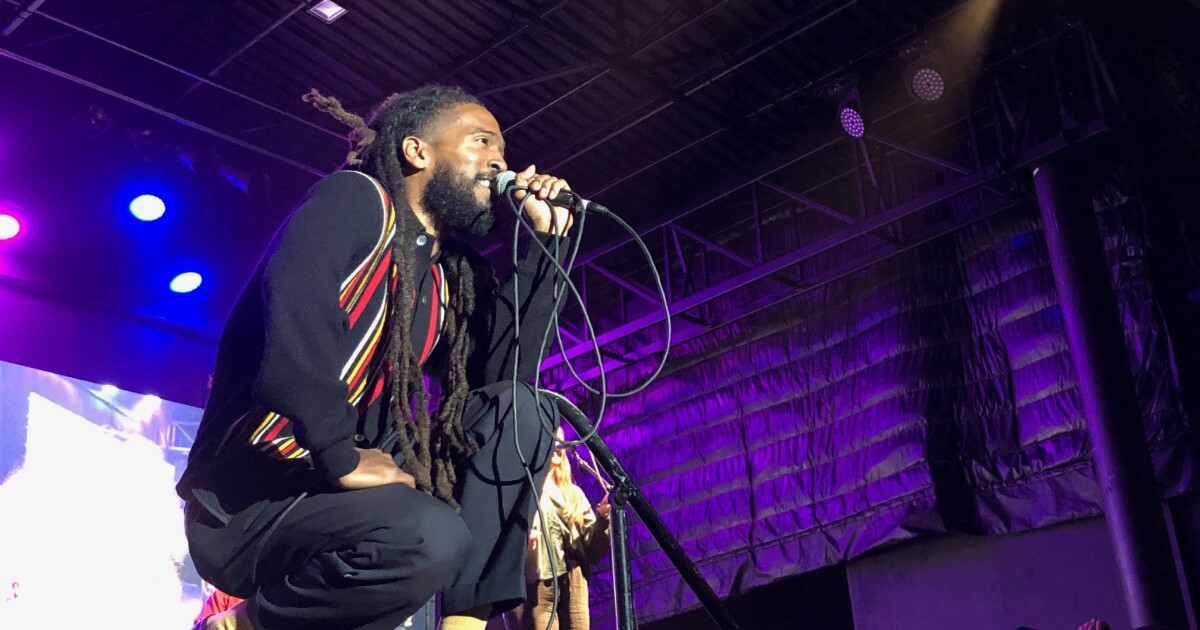 Fans and local musicians attended the San Diego Music Awards (SDMA) on Tuesday night at Bayside Humphreys Concerts. The annual awards ceremony is in its 31st year and aims to recognize the achievements of local musicians.

To kick off the evening, Lords of the Satellite won Best New Artist.

During the show, a lifetime achievement award was presented to soul singer Jesse Davis.

Among the many winners, Rebecca Jade, Sara Petite, Ms. Henry, Aviator Stash and Riston Diggs each took home multiple awards in multiple categories. Find the full list of winners at the bottom of this story.

RELATED: Two Years of Performing in the Pandemic, Part 3: ‘If Someone Gets Sick While They’re On Tour, They’ll Lose Money’

The 27 award categories cover a wide range of genres such as rock, country, jazz, pop and rap, with prizes awarded for best song, album, music video and more.

Musicians must be nominated by members of the San Diego Academy of Music to be considered.

One of the nominees for Best World Music Album and for Album of the Year is “Sonidero Guerrillero” from the band cumbia Sonido de la Frontera.

“For us, it’s nice that our album is well received in San Diego and outside, not just in the cumbia music scene, but also in other scenes such as hip-hop, punk and even the polka. It was great to know our music landed on new ears,” said band member Luke Henshaw.

RELATED: 5 Songs To Check Out In San Diego This February

“I think there’s a point (for award shows) locally,” Halloran said. “(But) I don’t think anyone writes a song to win an award.”

Some of the other nominees were The Fazes, You sacred souls, Tamar Berk and Nathan Hubbard.

“It’s really cool to have multiple nominations for SDMA alongside other great San Diego artists. It’s inspiring to be recognized in our hometown community and it motivates us to keep striving to chasing our dreams,” said Isela Humerez of new nominees The Fazes, who were nominated for Best Pop Song for “Remote Control” and Best New Artist.

Percussionist Nathan Hubbard was nominated for Best Jazz Artist and is a former winner of multiple SDMAs – three for Best Jazz Album and two for Best Hip-Hop Album with the band Parker Meridien.

“SDMAs are always fun, and being nominated is exciting, but I love seeing so many people from different scenes come together,” Hubbard said.

The Verigolds were nominated in three categories: Best Pop Artist, Best Pop Album and Album of the Year. They won the award for best pop album.

“We really appreciate our music community here in San Diego and it’s amazing how SDMA generates so much for our communities,” said Verigolds vocalist Jenna Cotton.

Song of the Year: “Will I See You Again” by Thee Sacred Souls

Album of the Year: “Rare Bird” by Sara Petite

Best video: “What’s it Gonna Be” by Rebecca Jade

Best Rock Song: “Birds of A Feather” by Jon Campos & The Incurables

Best R&B, Funk or Soul Song: “What’s It Gonna Be” by Rebecca Jade

Best Pop Album: “Take to the Sun” by The Verigolds

Best Jazz or Blues Album: “Serve It To Me Hot” by Chickenbone Slim

Best Folk or Acoustic Album: “Around the Bend” by Whiskey & Burlap