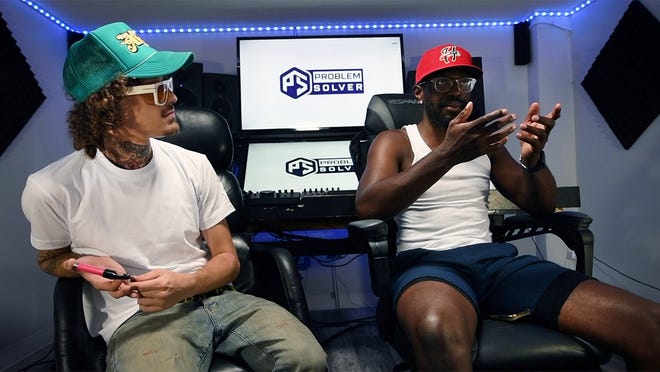 Although not as big as cities like Chicago or Philadelphia, York is still brimming with musical talent.

Knowing this and how competitive the music industry can be, “Off-White Sheddy” sound engineer Trevor Downs and “Moot Blaque” music producer Shanoy Moody inspired the creation of a space in town. and a resource for musicians and artists of all ages.

Several years ago, Downs and Moody noticed growing competition between recording studios in York and decided to team up and work together.

“We’ve gotten to the point where it’s better to help each other out than to compete for everything,” Downs said.

At the time, Downs and Moody operated small recording studios from their homes, and after spending time together, collaborating, the two realized their skills complemented each other.

“I miss everything he’s good with, and everything he lacks I do well — it’s a ying and yang situation,” Downs said.

Moody began his career as a producer, working with instruments and writing and creating music. Downs is a sound engineer, whose strengths lie in the technical side of sound and music recording.

A friendship had formed and they considered opening their own studio.

“We thought it would be a good idea to get together and have our own studio.” Moody added: “We’re both strong at what we do and bringing them together – we’re even stronger.”

Looking for fall activities?Festivals, brewery tours and activities to enjoy this fall in central PA

In 2021, Downs and Moody filed an LLC for their business in West York and opened Problem Solver Studios in December.

It’s a creative hub for sound engineers, music artists, and podcasters – just about anyone with an interest in audio production.

“We felt like there was no place for all artists to go, no matter who it was or what their interests were,” Downs said.

As far as pricing for equipment or studio recording time, Downs said it tends to be expensive, so one of their goals was to be a space that offers affordable prices to their clients.

“We created this place not only for people to go and get recorded, but also for people who know about sound engineering but maybe don’t have the equipment at home – it’s a creative hub for them.”

One of their clients is “PoloMann Solo,” a musical artist who has recorded across the country, but says working at Problem Solver Studios is unlike any other space.

“I’ve recorded in many studios, in Miami, New York, and I feel more comfortable recording here than anywhere else.”

He added, “They’re supportive of what the artist wants to do, but if there’s anything they can do to improve your performance or your track presence, they’ll do that as well.”

As a company, Downs and Moody said they never wanted their studio to feel corporate, but rather to provide an intimate atmosphere.

“The more comfortable you are in your space, the more creative you are, especially as an artist,” Moody said.

And at Problem Solver Studios, customers have the choice of three different recording rooms, each with a different vibe.

There’s the modern room with glossy white walls and black furniture, giving a “modern” feel, with a sound table and keyboard.

The red recording room has a microphone and sound recording equipment, as well as a video game system for guests to relax.

And finally, there’s the Cloud Room, a favorite among guests that combines sound equipment, a whiteboard, and comfortable furniture, with a soothing cloud-covered ceiling.

When it came to opening the studio, a big piece for Downs and Moody was being able to host a space where kids interested in making music could go and learn.

“When we filed the LLC, we also filed as a school,” Downs said.

One of their goals for the studio is to be able to incorporate summer work camps for kids who want to make music or work with sound engineering.

“I work with kids every day, and there are kids who want to do what we do, but they don’t know where to start,” said Moody, who coaches youth sports in addition to working with the music. .

As a teenager, Downs said he remembered being told it was a 9 a.m. to 5 p.m. job he should be working, rather than recording music.

While he knew music was what he wanted to pursue, he didn’t have many resources supporting his interests.

“Just being an outlet and a resource for kids to come in and have a safe space and to be a safe haven to be able to be creative — that’s a great thing,” Moody said.

For more information about Problem Solver Studios, check out their Facebook page or call them at (717)-885-2025