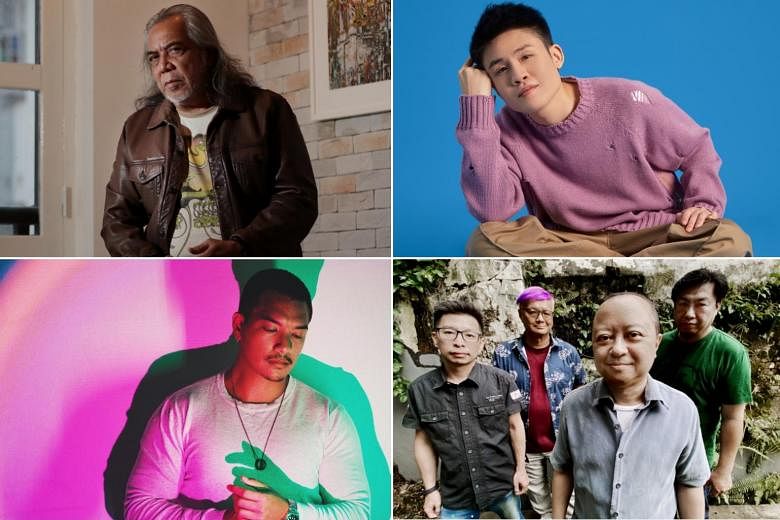 SINGAPORE — With the pandemic affecting their gigs and projects overseas, musicians in Singapore have turned to writing new songs and recording albums over the past year.

Veteran singer-songwriter Ramli Sarip’s new album is his first to be made in Singapore since the mid-1980s, while indie pioneers The Oddfellows’ latest album is their first since 1992.

By the end of the year, pop singer Gentle Bones, one of the most popular bands on the local English music scene, will release their first album since their debut eight years ago.

For Ramli, 69, his 23rd album Rasa (Feel) would not have materialized without the pandemic.

Since the mid-1980s, he has spent most of his time organizing concerts and working on musical projects in Malaysia and Indonesia. Unable to travel since February last year and with few gigs, he has focused on working on new songs with Singaporean musicians such as guitarist Addy Cradle, percussionist Riduan Zalani and bassist Din Safari.

Gentle Bones, real name Joel Tan, says he’s been more productive with new music since having to cut back on gigs and travel. He had previously only released EPs and singles.

“To be honest, the album wouldn’t have existed without this whole situation right now, because it forced me to focus on what I could do, which was making music in a confined space,” adds the young man of 27 years. .

A strong believer in musical collaborations, he has not only worked with other local artists such as Benjamin Kheng, but has also worked online with regional artists such as Taiwanese singer Karencici and Filipino singer Clara Benin.

For members of The Oddfellows, music has become a solace in these trying times. Many songs on their new album, What’s Yours And Mine, were inspired by life during the pandemic.

Guitarist, singer and songwriter Kelvin Tan, 57, says: “The idea behind it all is that during Covid-19 everyone is suffering, it’s everyone’s experience. We have this connection, we let’s get through this together.”

Singer-songwriter lewloh, who is based in the United States and recorded his album in Nashville, had to adjust his promotion strategies for his second album, michigan/missinghim, released in August.

Not being able to perform the new songs live in front of an audience has been a challenge, the 25-year-old says.

“Usually live shows help me promote my new projects and connect better with my listeners, but the new normal became live shows. It was definitely a tough adjustment. There was no one left in the audience to laugh at my bad jokes and give me clues as to whether I was doing a good job or not.”