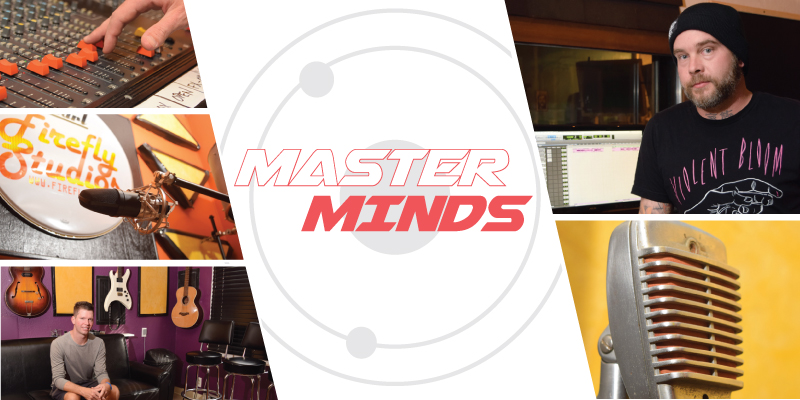 While the artist’s muse calls to you, it takes a great sound engineer to make a band or songwriter sound their best. A quick internet search yields hundreds of send-off options for mixing and mastering original music, but the Toledo area has local studios that offer a true human experience, often at a more affordable price. With credentials that include mentions in Rolling Stone and album credits with hip-hop legends, here are four engineers who built studio empires in our backyard.

Firefly Studios has an unassuming exterior; you may have passed it countless times without knowing what you were missing. Inside, the musicians find a warm atmosphere and a relaxed atmosphere.

Brett Dennison started Firefly Studios in 2003, shortly after graduating from BGSU with a bachelor’s degree in audio engineering. Originally based in Haskins, Ohio, the studio moved to its current West Toledo location in 2009. The studio, housed inside a home, focuses on achieving that “perfect sound,” making it a privileged place for a professional recording.

While artists reserve the studio for recording and tracking, Firefly also specializes in mixing and mastering, and much of Dennison’s work is devoted to perfecting tracks in the final stages of recording. “Song development, high-quality tracking, creative mixing, and professional mastering are the things Firefly does best,” he explained. “The goal is always to try to get the most out of every song we record; to try to understand it at its core.
One of the studio’s most attractive features is its collection of instruments, including two full drum kits, two pianos, a sitar, and your choice of basses and guitars. “Using high-quality tools is a big part of our recipe,” Dennison said. To book a session, visit firefly419.com.

‘The house that
bat built’

Fat Sound Records is the brainchild of Kevin Elliott, a Toledo native who started recording at the age of 15. A classic rags-to-riches story, Elliott began recording in basements, before working his way to world-renowned production team Anno Domini, who worked with hip-hop legends such as the Wu-Tang Clan, Snoop Dogg and Rick Ross. Under the moniker Vherbal, Elliott earned credits from big names like Redman, Immortal Technique and Sean Price, and his music has been featured on MTV, HBO and EA Sports.

“Before all of this happened, I was living in an abandoned building with nothing but a futon, a TV, and a bag of clothes,” Elliott explained. “I took that opportunity and started doing 10 beats a day for almost three years, and here we are,” he said, sitting in his downtown studio. “It’s the house that beats built.”

Elliott built his studio on the sixth floor in the downtown Secor building so that Fat Sound Records could connect with the Toledo community throughout the recording process. “The studio is my way of reconnecting with the community and the artist, and contributing my expertise,” he said. “I meet everyone who calls me; I give everyone a chance.

His studio, set up with a lot of hustle and a bit of luck, allows Elliott to be candid about what he does and why. “It’s not about the money,” he said. “Life is short.”

The Ohio Recording Company, a full-service studio located on Route 19 in Fremont, offers a space to make great music away from the noise and distractions of the city, as well as more affordable overhead in smaller towns. Since 2015, Brennan Willis’ Ohio Recording Company has produced high-quality music and multimedia projects for bands like Bliss Nova and The Eric Sowers Band, as well as myriad area singer-songwriters.

“We invest in our artists by providing premium recordings, media content and marketing through our own social profiles,” Willis said, adding, “We always work with the artist in mind, helping them to promoting their music and taking personal pride in our projects.

The studio building, originally a large barn, was converted into a studio after an interested investor approached Willis about building his own accommodation. Inspired by design and concept by Muscle Shoals Sound Studio in Sheffield, AL, the studio forms a “creative epicenter in a small town”.

Talking about both his work and the functionality of the studio, Willis emphasized collaboration and quality. “A big thing that excites me is collaboration,” he said, as The Ohio Recording Company has partnerships with house musicians and record manufacturers, making it a one-stop-shop for musical production. Another special feature is the studio’s ability to follow live band recordings; its large tracking room and high-end equipment result in unique sound quality and music video capabilities.

For over 15 years, JC Griffin has been recording and mixing music from his home, Lakebottom Recording House, a full-fledged recording facility with a strong regional reputation. He prefers “recording house” to “studio”, explaining that “the ‘studio’ makes it seem like you can’t put mud on the carpet. Lakebottom provides a laid-back, no-frills atmosphere for single-song or full-length recording sessions.

Griffin got his start in audio production after receiving a four-track cassette recorder for his 15th birthday. Invited in the early 2000s to do a demo recording for a friend, he released the recording equipment after a few years away from art. “He just never got put away after that,” he explained, as more bands, some of whom were friends, approached him to record.
The engineer is serious about quality, and his advice to budding musicians was straightforward: “With the Internet and the ability to send mixes anywhere [ …] if you are not going to spend a lot of money, [the music] not worth doing,” he said. “Take it to a real person who knows what they’re doing, not some internet yahoo.”

2017-10-11
Previous Post: The 50 Best-Selling Music Artists of All Time | The Independent
Next Post: The 10 Best Recording Studios in Toronto