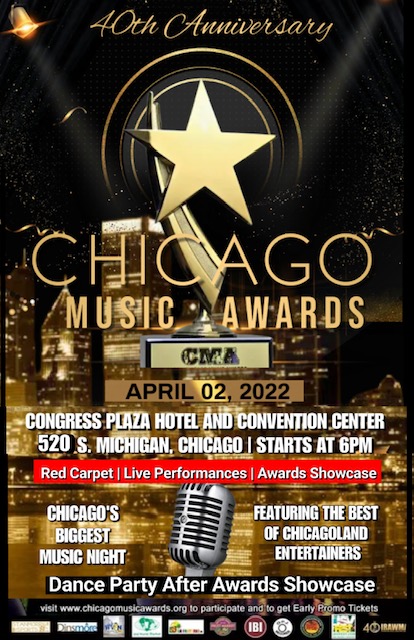 The 40th Anniversary Chicago Music Awards and landmark celebration will make history by honoring Chicagoland’s finest artists across all genres of music. Chicago’s biggest night of music events is scheduled for Saturday, April 2, 2022 at the Congress Plaza Hotel and Convention Center located at 520 S. Michigan Ave. The red carpet and VIP reception begins at 6:00 p.m. and the awards presentation at 7:30 p.m. An After Awards Dance Party follows the conclusion of the awards ceremony.

The live, in-person celebration of the Chicago Music Awards since the pandemic will be hosted by Chicago Emmy Award-winning journalist Art Norman, radio personality Bionce’ Foxx and Chicago artist Big EZ. The awards presentation will begin with a captivating performance by Jesse White and the Jesse White Tumblers.

One of the most coveted honors is the Chicago Founding Father Jean Baptiste Pointe DuSable Humanitarian/Community Awards, which will be presented to Ms. Melody Spann Cooper-President of WVON 1690 Radio/Midway Broadcasting Inc., and Mr. Cesar Rolon-Latin Activist/Philanthropist and Imagine Marketing Consultant. Lifetime honors will go to the late Blues Great Jimmy Johnson (who died shortly after being selected for this award), the Chosen Few DJs and Illinois Secretary of State Jesse White for the 63-year career of the Jesse White Tumblers. outstanding contributions to entertainment in Chicago and around the world. There will be a special tribute to Jimmy Johnson, Syl Johnson, Sam Lay and Pervis Spann, whom the world lost this year.

The Marcus Garvey History and Education Lifetime Award will be presented to journalist/historian Salim Muwakkil. The Martin’s International Awards of Honor will be presented to Dr. Calvin “Doc” Flowers – Manatee Records for his contributions to the music industry. Three grocers for years of community and humanitarian contributions: Rogers Park Fruit Market for 50 years, Old World Market – 40 years and LaFruteria, Inc. – 30 years will also be honored.

After the grand finale of the awards ceremony, there will be a festive After Awards Dance Party.

Tickets for the 40th anniversary of the Chicago Music Awards can be purchased at www.chicagomusicawards.org.

Elaine Hegwood Bowen, MSJ, is the entertainment editor for the Chicago Crusader. She is the winner of the National Newspaper Publishers Association’s “Entertainment Writing” award, contributed to “Rust Belt Chicago,” and is the author of “Old School Adventures from Englewood: South Side of Chicago.” For information, Old Fashioned Adventures of Englewood – Chicago South Side (lulu.com) or email: [email protected].