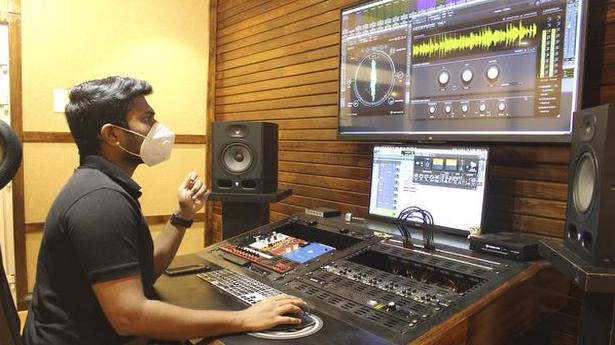 The music can’t stop, and indie musicians who have been content with home setups are once again turning to recording studios. Here’s how Chennai is finding ways to meet the operational challenges posed by the pandemic

The music can’t stop, and indie musicians who have been content with home setups are once again turning to recording studios. Here’s how Chennai is finding ways to meet the operational challenges posed by the pandemic

Few of us would have made it through lockdown without songs – and other art forms – to comfort, calm and amplify us as we needed them. Making music that does all of that takes not only talent but also a team, lots of gear, and technical know-how. As recording studios around Chennai gradually reopen, they are struggling to navigate.

For example, “You can’t wear a mask while recording vocals,” Mervin Thomas flatly says. It would distort or muffle the vocalist’s voice, and thus affect the song as a whole, says the TASE Studio founder, explaining one of the many challenges recording studios in Chennai – and elsewhere – have to work around during Unlock 4.0.

As COVID-19 cases continue to rise, music producers in Chennai are well aware that hygiene cannot be a secondary concern. But how do you keep confined spaces filled with temperature-sensitive equipment operational and safe? The first factor is trust. “For the moment, I only work with musicians that I know, explains Mervin. This sentiment is shared by Ashvin Vinayagamoorthy, who runs Shimmr studios in Mogappair. “If we’re introduced by friends or if I know them personally — basically, if I know they can follow a certain work ethic in the studio, we call them,” says Ashwin, who works with emerging indie from the city. musicians as well as industry talent. 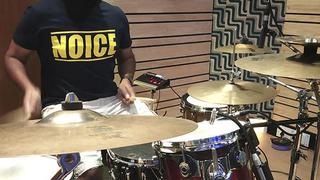 Work ethic is essential, because the rules, especially now, are many. Singer-songwriter Alvin Presley describes his first recording experience after last week’s lockdown. “I went to Voice and Vision studios in Kodambakkam run by Alaap Raju. The studio has rules: there must be a maximum of three people; everyone should wear a mask unless the person is singing. There is a recording booth and a studio room. Inside the check-in booth they have a foot-operated hand sanitizer which we used with a foot pedal, in addition to another hand sanitizer at the entrance to the booth,” recalls- he.

While the three-person cap makes sense in terms of safety and social distancing, it has other implications. Big Sam drummer Goutham Healer observes that while it worked well for their recording session with a vocalist and bassist, it also means that some musical arrangements in general still cannot be recorded in the studio, at least for the moment. “A full group cannot come together. And if someone wants to record a whole string section – say five or ten people playing the violin together – they can’t do it. The only person allowed to remove their mask during their session, he recalls, was singer Samuel Vijayan while singing.

The point, says Alvin, was to keep the performers’ physical contact to a minimum. “We had brought some of our drum equipment, which was particularly needed for this recording and which was not available at the studio. Lijesh at the studio had everything set up in advance, so we didn’t have to touch too much, and we kept letting him know what equipment we wanted to handle. The pickups had already been installed and were not to be touched. The only other thing we used was the couch.

While studios take the lead on safety, the musicians involved should also do their part. Said Alvin, “I have a home studio setup, so I had done some preparatory work – basic structure and placements – beforehand. When the three of us walked in, we had a solid four-hour session, during which we were able to completely finish a song called “Camouflaged Emotions”, and also do a rough track of another song.

This new project comes just over a month after the release of Alvin’s debut EP ‘Fall Today’, which he created entirely at home. So why go to the studio now? In simple terms, if the quality of the music depends on the talent, the quality of its sound depends on the right conditions and the equipment. Alvin explains: “It also depends on what I’m programming on software and what I’m recording live. When I was recording at home, it was difficult for me to get the right voice recording quality. I had to find the right place where the reverb wasn’t too loud and at the same time not too dead. Studios have a vocal booth made just for that. The purpose of the venue is recordings only; our houses are designed for other things.

However, the very design of a studio can also pose operational challenges. For example, rooms should be soundproofed and equipment should be kept at very low temperatures to prevent overheating during use. This is probably why Mervin, on his way to his studio for a check two weeks after the first lockdown, found a termite infestation. “My studio has a lot of woodwork and poor ventilation, he explains, I had to completely redo a wall and do a treatment. I reopened after this last confinement; we took very few customers and went slowly. 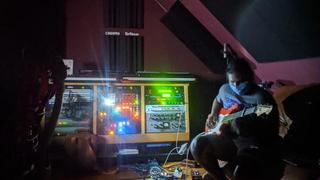 The biggest concern, he says, is the singer, who has to sing without a mask and be very close to the microphone. “Even more important than sanitizing the mic is sanitizing the pop filter, which sits between the mic and the singer. We sanitize both of them, and all of our headphones, with an isopropyl alcohol before each session,” says Mervin, who works with indie and gospel musicians.

Shimmr Studios has a small solution for this, thanks to the open space just outside their rooms, on the terrace of the independent bungalow where the whole studio is located. According to Ashwin, “We give the bands this big space to jam and rehearse, and then we take turns coming in just to record.”

Ashwin adds that it’s important to track customers. “If singers are involved, we try to keep a day and a half apart between clients — never two singing sessions in the same day. For everyone else, we swap mics for each session. Overdubs help bands: we record two people at once and play that recording back so other band members can play along.

Ashwin’s clientele, he says, includes not only indie talents like Kevin Fernando and Shravan Sridhar, but also people like Sid Sriram, Chinmayee and Harini. “But the industry took a step back during the lockdown; it was the independent musicians who continued to create music throughout.

2020-09-09
Previous Post: Inside Martin Garrix’s amazing renovated STMPD recording studios: “The original plan was just to give it a new paint job. Then it got a little out of control.”
Next Post: Finding Entrepreneurial Leadership in Recording Studios | News