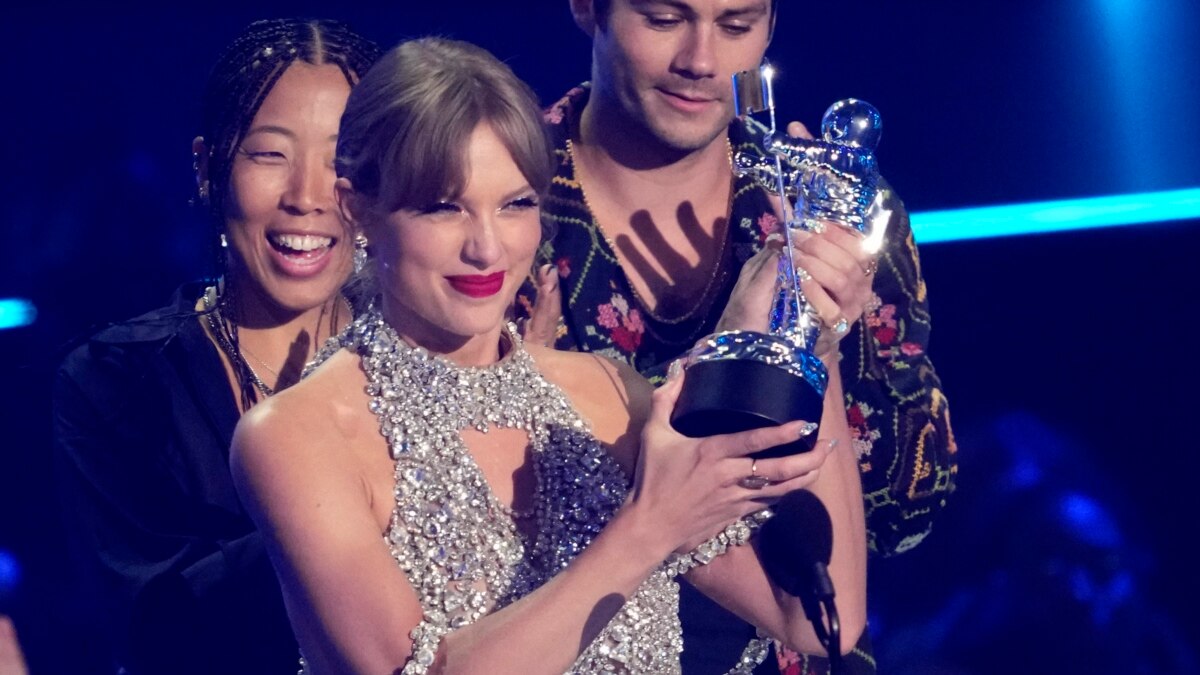 By: Rebecca A. Guy
In: Music awards
New York City –

Bad Bunny, the Puerto Rican Latin trap and reggaeton artist who is one of the biggest stars in the world, won MTV’s Entertainer of the Year award on Sunday at the annual Video Music Awards.

But the entertainer was conspicuously absent from the show: he was busy with his own hit tour, playing the second night of a sold-out concert at Yankee Stadium which, over the weekend, drew some 100,000 fans.

Bad Bunny, dressed in a satin pink suit and white sunglasses, accepted the award via video and also delivered a seismic performance of his hit “Titi Me Pregunto” from New York’s baseball stadium, where the song echoed through the streets for months.

“Thank you very much, New York,” the 28-year-old said in Spanish to thunderous applause.

“From the beginning, I always believed that I could be great, that I could be one of the biggest stars in the world, without changing my culture, my language,” he said. “I am Benito Antonio Martinez from Puerto Rico – for the whole world.”

In a sure sign that the pandemic tour was back in full swing, another of the year’s biggest stars, Harry Styles, was also unable to make it to the VMAs – which aired from the Prudential New Jersey Center – due to its own show at Madison Square Garden.

The artist who released ‘Harry’s House’ this year also accepted his award for album of the year via video.

Swift album on the way

Taylor Swift was also among the big winners of the night, turning heads on the red carpet in a dress dripping with crystals before taking home the night’s top prize for music video of the year for her 10-minute film ‘All Too Well”.

“I’m so proud of what we’ve done,” said the 32-year-old, who has kept her vow to re-record her first six albums so she can control the rights.

“We couldn’t have made this short without you, the fans,” Swift said onstage. “Because I wouldn’t be able to re-record my albums if it wasn’t for you. You encouraged me to do that.”

She then gave fans a gift in return, announcing that her new album will be released on October 21.

Shortly after the show ended, the megastar revealed the name of the new project.

“Midnights, the stories of 13 sleepless nights scattered throughout my life, will be released on October 21. Meet me at midnight,” she wrote on social media.

Wearing her signature pink wig, the Queens hip-hop icon delivered a medley of her hits, including “Super Bass” and her latest single “Super Freaky Girl.”

“I was born and raised in the ghetto of Brazil, and for anyone born there, we never thought it was possible,” she said as she accepted the trophy.

Eminem and Snoop Dogg began their performance sitting on a couch as Snoop smoked a giant – albeit fake – blunt, before the pair headed to the metaverse for a trippy, spirited performance of their latest collab “From the D 2 the LBC”.

Marshmello and Khalid performed “Numb” with disorienting neon visuals that created a brief but heady rave effect, while South Korea’s Blackpink performed their first show at an awards night in the United States.

Lizzo also performed before winning the Video For Good award – which recognizes videos with social or political messages – for her song “About Damn Time”.

Dressed in a corseted cone-bra dress reminiscent of Madonna, the superstar thanked fans for voting for her to receive the award before nodding to American politics.

“Vote to change some of these laws that oppress us,” the star urged.

And at the awards show which is historically much more known for its antics than the actual awards, Johnny Depp – fresh off his controversial libel lawsuit against his ex-partner Amber Heard – appeared as MTV Moonman, his head digitally superimposed on the flying astronaut.