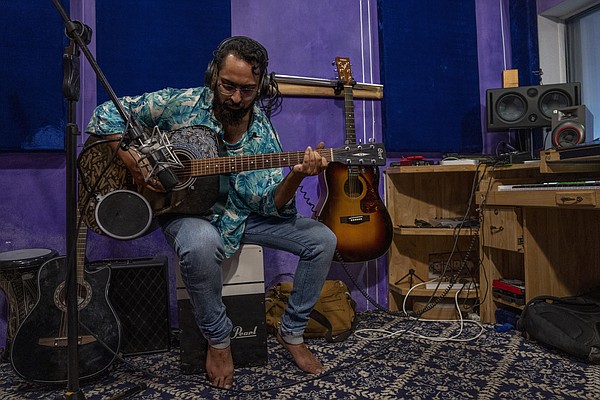 Sarfaraz Javaid thumps his chest rhythmically in the music video, swaying on the guitar and letting his throaty voice echo through the forest: “What kind of soot covered the sky? It darkened my world. … Why the house been entrusted to strangers?

“Khuaftan Baange” – Kashmiri for “night’s call to prayer” – unfolds like a dirge for Muslim-majority Kashmir, the starkly beautiful Himalayan territory that is home to decades of territorial disputes, soldiers armed forces and severe repression against the population. It is mournful in tone but lavish in lyrical symbolism inspired by Sufism, an Islamic mystical tradition. Its shape is that of a Marsiya, a poetic interpretation that is a lament for the Muslim martyrs.

“I just express myself and shout, but when the harmony is added, it becomes a song,” Javaid, a poet like his father and grandfather, said in an interview.

Javaid is part of a movement of artists from disputed Kashmir, divided between India and Pakistan and claimed by both since 1947, who form a new musical tradition that blends progressive Sufi rock and hip-hop in an assertive expression of political aspirations. They call it “mindful music”.

Drawing on elements of Islam and spiritual poetry, it is often laced with religious metaphors to circumvent measures restricting some freedom of expression in Indian-controlled Kashmir that have led many poets and singers to swallow their words. It also seeks to bridge tensions between Muslim tradition and modernism in a region that in many ways still clings to a conservative past.

“It’s like letting go of decades of pent up emotions,” Javaid said.

Kashmir has a centuries-old tradition of spoken word poetry which is heavily influenced by Islam, with mystical and rhapsodic verses often used during supplications in mosques and shrines. After the rebellion against Indian rule broke out in 1989, poetic renditions of liberation were played over mosque loudspeakers and elegies inspired by historic Islamic events were sung at the funerals of fallen rebels. .

Two decades of fighting left Kashmir and its people scarred by the deaths of tens of thousands of civilians, rebels and government forces before the armed struggle fizzled out, setting the stage for mass unarmed protests that rocked the region in 2008 and 2010. Around this time, Kashmir also saw the rise of protest music in Anglophone hip-hop and rap, a new anthem of resistance.

Singer-songwriter Roushan Illahi, who performs as MC Kash, pioneered the genre, creating angry music that grabs you by the neck and has become a rallying cry for young people use high-pitched rhymes and rhythms to challenge India’s sovereignty. on the region.

However, Kash’s songs have come dangerously close to sedition, as it is illegal to question India’s claim to the restive region. The country has severely restricted freedom of expression regarding the issue in Kashmir, including some restrictions on media, dissent and religious practices.

Frequent police interrogations pushed Kash to a point where he almost stopped making music. Some colleagues continued to record and perform, but began to incorporate coded language or moved away from politics altogether.

“At first it was a chokehold,” Kash said, “but now it’s a pillow over your mouth.”

On a recent afternoon, a cohort of young artists gathered at composer Zeeshan Nabi’s home studio on the outskirts of Srinagar, Kashmir’s main city. Filling the room with swirls of cigarette smoke, they passionately debated the essence of metaphors and religious references in their work.

“What (religious symbolism) does is constantly knocking at the door, either as a reminder or as a remembrance of the past,” Nabi said.

He expressed his optimism that the gag is temporary: “How long can you hold a grip? The oppressor can oppress until about a while.”

“We are dreamers,” laughed Arif Farooq, a hip-hop artist who uses the stage name Qafilah.

Qafilah’s music video “Faraar” – “the runaway” – begins with a shot of an accordion wire and him sitting in the courtyard of a shrine dedicated to Kashmir’s most revered Sufi saint, Mir Sayyid Ali Hamadani. It evokes the ancient battle of Karbala, where the grandson of the Prophet Muhammad was martyred and which symbolizes the fight against injustice and oppression.

“Our disease can only be cured by revolution, my friend. Every answer lies in Karbala, my friend,” Qafilah insists in the song.

Religious symbolism, Qafilah said, is a creative device to reflect Kashmir’s pain and also escape the gaze of the state.

“You want to fly, but you don’t want to be caught,” he said.

The symbolism of faith as a subtext is hard to miss in this new form of music.

A recent video, “Inshallah” — “God willing” — has lyrics that evoke monotheism, the cornerstone of the Islamic faith. In it, singer Yawar Abdal imagines a Kashmir where people, blindfolded and with nooses around their necks, are set free amid chants of “All Shall Be Free”. The refrain “inshallah” contrasts with a resounding chorus of morning prayers sung in mosques.

Another song – “Jhelum”, named after Kashmir’s main river – became an instant hit for contrasting the banality of daily life in Kashmir with the continued mourning of the dead. In videos online, users have since put the song over moving and still images of fallen fighters to commemorate them – it’s partly a way of resisting authorities’ policy since 2020 of burying suspected rebels in distant mountain cemeteries, depriving their families of the opportunity to perform the last rites.

“There’s this tension in the air that shapes you a certain way,” said poet and singer Faheem Abdullah, the man behind “Jhelum.”

2022-07-09
Previous Post: Telemundo Unveils “Road to Billboard Latin Music Awards” Concert Series – Billboard
Next Post: Here is the list of the 10 most popular musical artists of 2022